In an admittedly autobiographical peek at the people and events which helped shape his adult personality, playwright Greg Vie spent the past four decades polishing his tribute to roommates and friends of his youth. Even though the specific locations of his memories no longer exist today (read a rental house on Martel Street and the Shubert Theater in Century City – gone the way of the dodo bird), West Hollywood is still here and remains a thriving city-within-a-city. Vie’s recollections are detailed, colorful, frequently gripping, and often highly emotional. Thanks to his mentoring by many influencers over the intervening 40 years, Vie “dug deeper” to grow in self-understanding and maturity as the years went by. The final product of his ruminations and reminiscences resulted in THE DIRECTION HOME, a play currently living and breathing at the Let Live Theatre on Formosa Avenue. 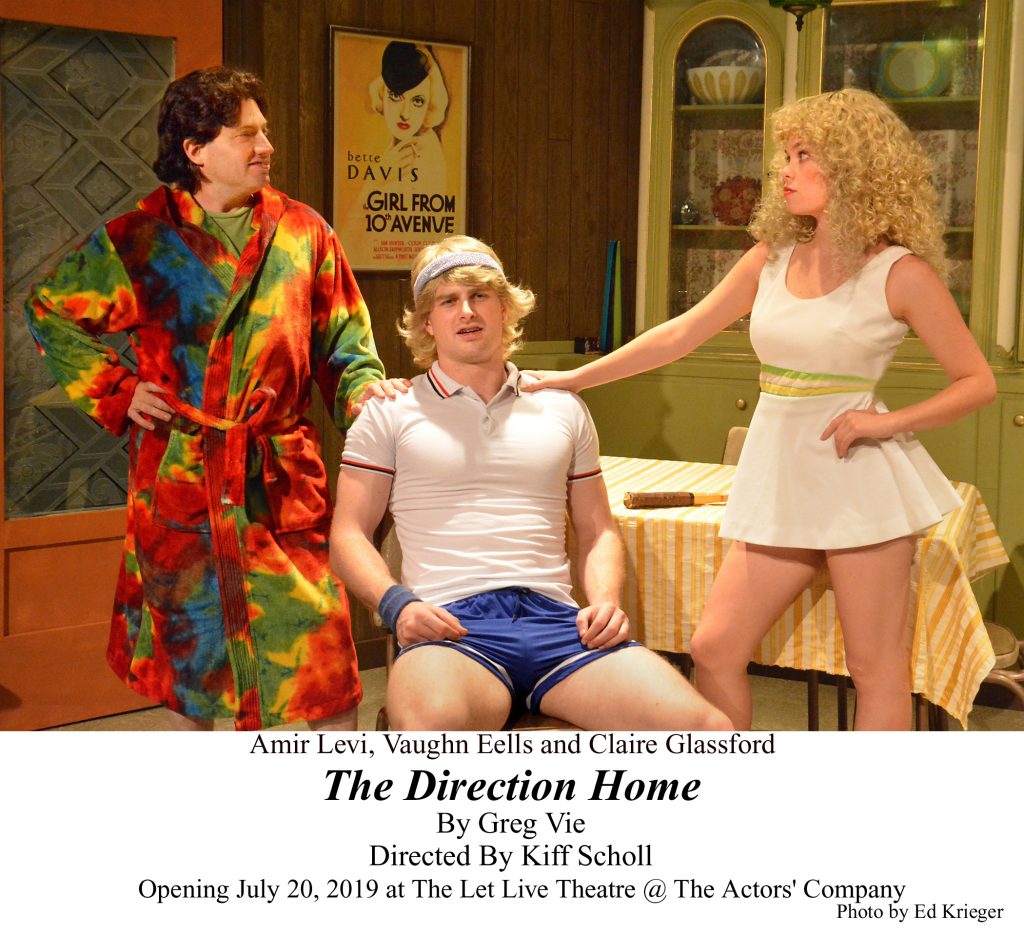 A quiet and introverted twenty-two year-old, Stephen (Jacob Barnes) finally graduated from college and left his mother’s comfy nest to try a solo flight on his own. He’s rented an apartment on Martel Street in West Hollywood with two roommates, Ted (Amir Levi) and Brad (Vaughan Eells). The three are an odd assortment of guys barely weaned from their school frat days – and they all hope to find the pot of gold at the end of their dreamed-of rainbow. These would-be Laurence Oliviers and Warren Buffets are naïve and so very young as they whole-heartedly pursue their goals. 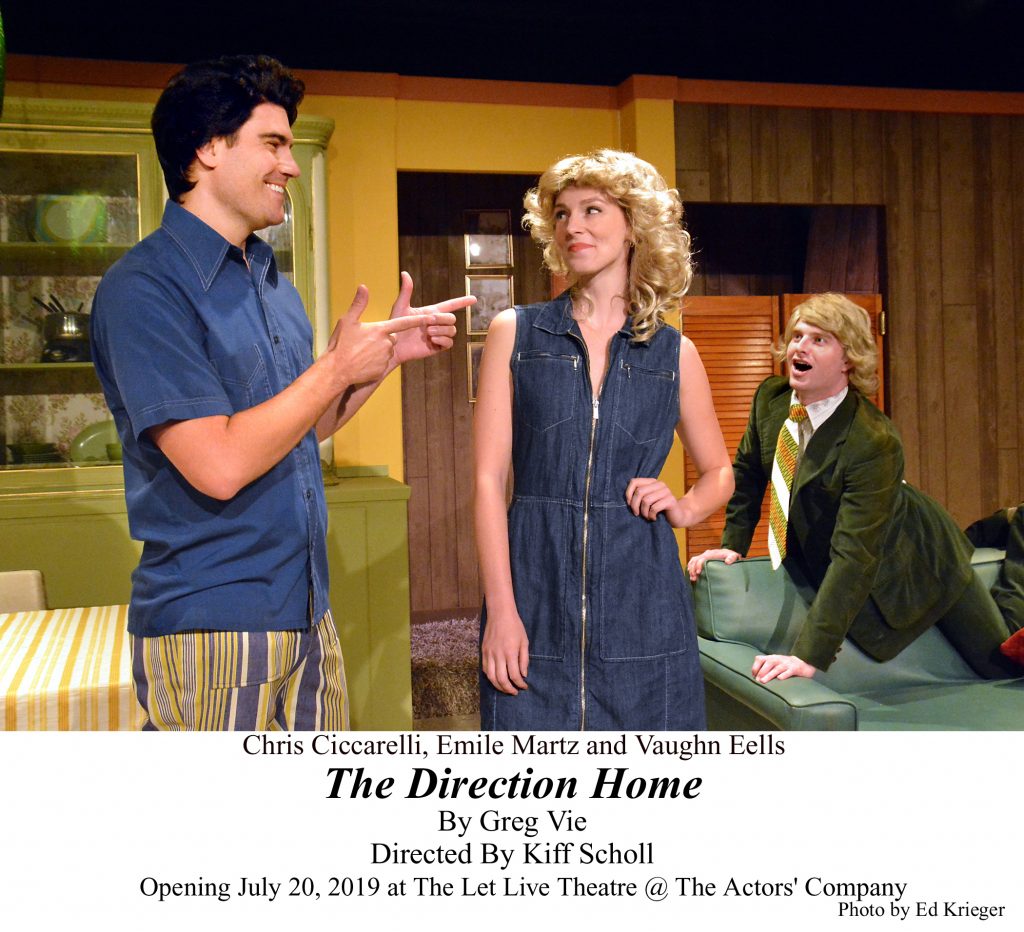 Within minutes of their arrival at their new digs, Katie (Emilie Martz), curly and hopeful, sweeps in with all her earthly possessions – apparently promised a “temporary” spot in the apartment by Brad. Soon she settles in as the shy Stephen’s roomie and quickly becomes the “housekeeper” during Stephen’s daily phone calls from his smother. Whatever else is going on in the “real” world, strong sexual overtones soon pop up as full-on queen Ted finds himself head-over-heels with gorgeous jock Brad – while Brad seems to have the hots for sexy girlfriend Mimi (Claire Glassford). The pretty and enthusiastic wannabe actress Katie finds herself drawn to handsome next-door neighbor Michael (Chris Ciccarelli), an actor specializing in lucrative commercials. All while virginal Stephen doesn’t know which way to turn.

Sooner or later, lots of secrets will begin to ooze from behind their carefully fashioned facades. The impact could well be catastrophic – or maybe just pointing in the direction of adulthood clamoring to be heard. 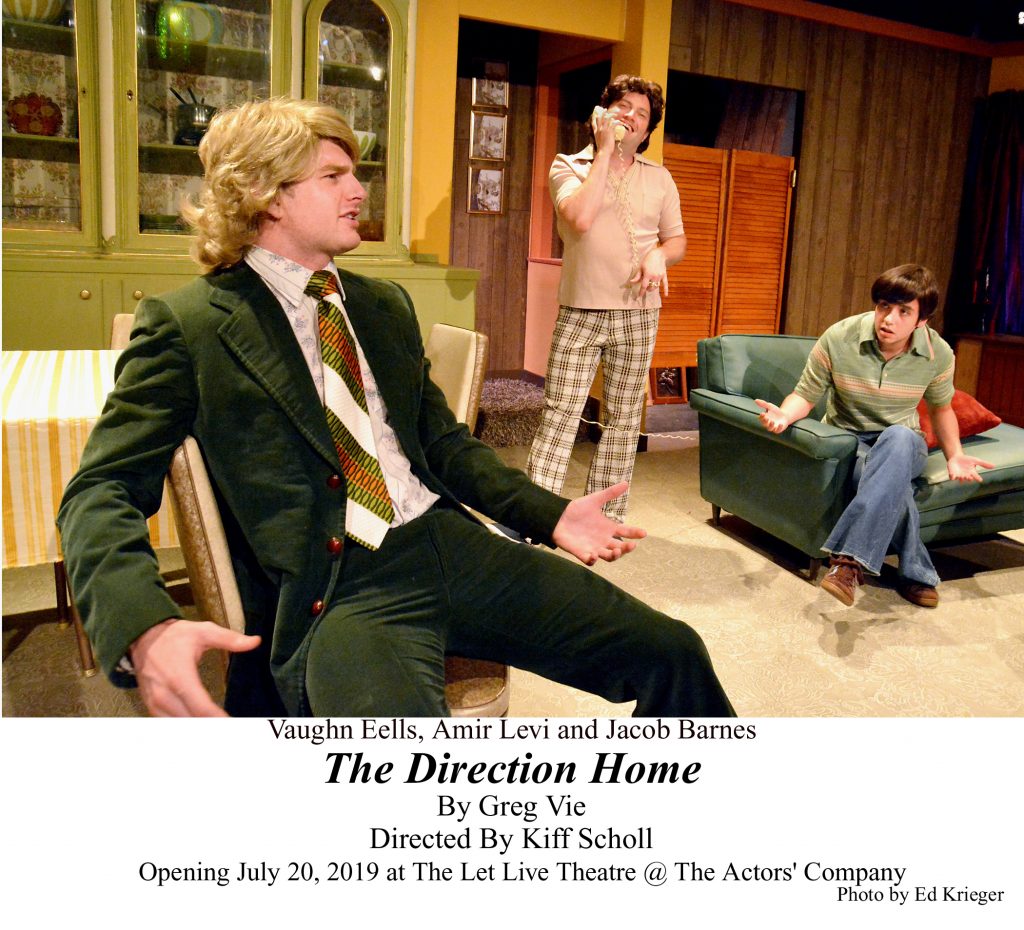 Director Kiff Scholl does an excellent job of keeping the action moving with the able assistance of a talented group of ensemble actors. Although not very subtle, the cast (and especially Amir Levi) typically displays lots of energy. Adam Haas Hunter’s scenic design captures the post-college-temporary vibe perfectly, and the production team does nice work grabbing the theme of the tale. Although the presentation is sometimes choppy, juvenile, and uneven, playwright Vie’s thrust and passion are everywhere evident. Growing up can be a hard thing to do.