The Chicago, Black Ensemble Theater continues it’s 2019 season (Legends and Lessons) with You Can’t Fake the Funk (A Journey Through Funk Music), written and directed by Daryl D. Brooks. Once you enter the mothership, there’s no time to sit back and relax, because you will be grooving to the beat as you are taken on a musical journey through time. Brooks does a marvelous job incorporating a historical perspective of the funk era and how the music played a pivotal role in the civil rights movement and it’s impact on the film industry.

Doctor Funk (Dwight Neal) navigates the audience as the mothership travels to the time of Afro’s, Flashy outfits and platform shoes. Ruben Echols nails wardrobe by recreating the looks from the 70’s and 80’s. The set designer, Bek Lambrecht did a great job with staging. The choreography, by Chris Carter was spot on. Together they created the illusion of being whirled into a time machine and transported inside a live taping of Soul Train. The combination had the audience out of their seats singing and dancing. 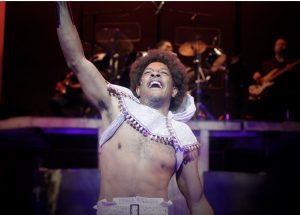 This productions is entertaining, full of energy and great vocals! Notable mentions were the best performances that included songs by Sly and the Family Stone, Earth, Wind & Fire and the Gap Band. 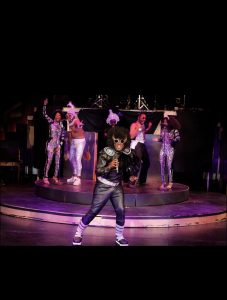 I highly recommend this show! If you are a fan of funk, then this one you’ll definitely enjoy. You Can’t Fake the funk (A Journey Through Funk Music) runs through September 22, 2019. Tickets are available at www.blackensemble.org, 773-769-4451 or at the Black Ensemble Theater Box Office located at 4450 N. Clark Street. 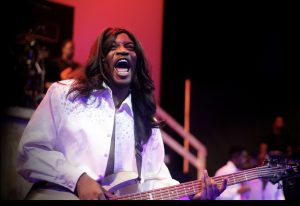 August 8, 2019 Tony Sportiello Entertainment 0
Spread the love
Spread the loveOne of the sins of Broadway right now is that people come here from all over the world yearning to see electrifying theater, but given that the cost for a family of four […]

Through These Eyes: Perfect No More

April 6, 2018 Dr. Patti Martin Entertainment 0
Spread the love
Spread the loveThrough These Eyes which premieres this Thursday, April 12, at the La Mirada Theatre of the Performing Arts is a drama that encapsulates the overwhelming demands that teens face in striving for perfection […]

Guards at the Taj Review – The Beauty of Birds and Buildings, The Horror of Humans in Milwaukee Rep’s Latest

October 1, 2018 Jessie Bylander Entertainment 0
Spread the love
Spread the loveIt was a curious experience to visit the Milwaukee Rep and take in the vibrant hope of In the Heights, then return less than a week later to see the opening of Pulitzer Prize finalist Rajiv […]